As King Robert the Bruce of Scotland plots to retake his English occupied castles, he needs the stealth and skill of his elite soldiers, the Highland Guard. Fearless and indomitable, no men are more loyal to their king, or cherished by the women they love. The talents of legendary marksman Gregor “Arrow” MacGregor are crucial now, as Bruce moves to reclaim his Scottish holdings. Gregor is considered the most handsome man in Scotland, and his fame as an archer is rivaled only by his reputation with the lasses as a heartbreaker. But when his infamous face is exposed during a covert mission, Gregor is forced to lay low. He returns home only to find a new battle waiting: a daring game of seduction involving his now very grown up and very desirable ward, Cate of Lochmaben. A born fighter, Cate was clinging to life when Gregor rescued her after a vicious English raid on her village left her mother dead. But five years later, the once scrappy orphan Gregor took under his protection has become a woman. Brave, strong, and skilled in warfare, Cate is determined to lay claim to the warrior who refuses to be trapped. The heat in his eyes tells her she has his attention . . . and his desire. But will Gregor allow his heart to surrender before danger finds them, and the truth of Cate’s identity is revealed?

Who could resist Gregor MacGregor? I certainly could not. The Arrow is a brilliant addition to the Highland Guard series and one that was highly anticipated. Monica McCarty did not disappoint. Gregor aka Arrow is well known as the most handsome man in all of Scotland and the title grates on him. Gregor hates being known for little more than his face and is use to woman throwing themselves at him for superficial reasons but Cate, Cate is different from all those other woman. She’s strong, brave, and determined to show Gregor that her love for him is based on more than a pretty face.
Watching Cate as she tries to get Gregor to see her as more than just his ward was a struggle at times. There were moments when I wished I could reach into the book and smack Gregor upside the head for being so dense and when Gregor began losing faith in the tender feelings he was developing for Cate, when he began second guessing her intentions based on his jaded past, well then I really wanted to smack him. Couldn’t he see how much she loved him? Could’t he tell that she would never be anything but genuine about her feelings for him? Men can be such morons sometimes.
Thankfully when all seems lost, Gregor finally pulls his head from his arse and we are able to put our faith in him once more. The Arrow had so many unexpected twists and turns that I was constantly biting my nails, waiting to see the story unfold. Monica built a world with a strong foundation based on history but managed to captivate our hearts with her beautifully written characters who’s hearts are more true than words can express. I cannot wait to see what she has in store for us next and am pleased to say that The Arrow is truly a great read.
There have been many criticisms regarding Cate our heroine, but what I gathered from the story is that Cate is strong. She is brave and stubborn and refuses to back down. She helps others and takes in those who need her. She has a strong desire to build a family, to gain the sense of belonging and security that was denied to her a child. Cate has struggled in life and had to face the rape and murder of her mother when she was only fifteen years old but that pain and that experience has not broken her. Cate is determined to be in a position to defend herself. She trains in warefare and can take down a man twice her size. How anyone can believe that she is unworthy of being our heroine, and unworthy of Gregor’s affections astounds me but that said, it is my belief that Cate is the perfect match for our Arrow and just as in the story when Seoniad was unable to see past her jealousy and desire for Gregor, I feel our readers are unable to see past their expectations of who the most beautiful man in Scotland should be with based on his looks, verses who our Arrow should be with, based on his heart.

Random side note. The cover for The Arrow was actually changes. The above image is the current cover but here is the original. Many love the new cover though I personally prefer the original. What is your take on the cover? And don’t forget to check out the rest of Monica’s highland guard series. 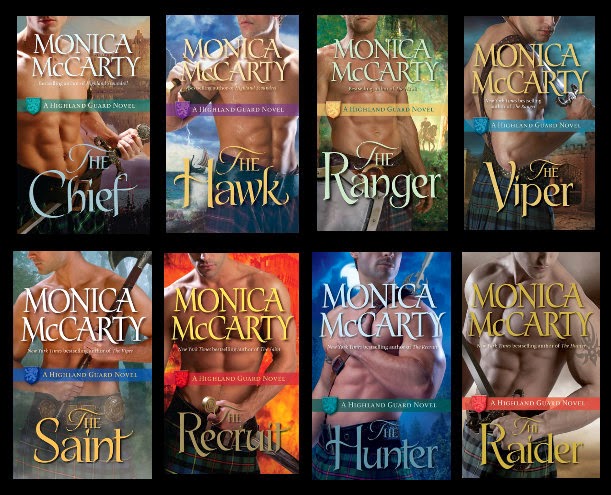 What do you get when you mix a legal career, a baseball career, motherhood, and a love of history with a voracious reader? In my case, a Historical Romance Author.Like most writers, I’ve always loved to read. Growing up in California there was always plenty to do outside, but all too often I could be found inside curled up with a book (or two or three). I started with the usual fare: The Little House on the Prairie series, The Chronicles of Narnia, The Hobbit, Watership Down, Nancy Drew, and everything by Judy Blume. Once I cleared off my bookshelf, I started swiping books from my mom. Some, like Sidney Sheldon’s The Other Side of Midnight, probably weren’t the most appropriate choice for a pre-adolescent—although they were definitely illuminating. I can still remember the look of abject horror on my mom’s Catholic-girl-face when I asked her what a virgin was. After that rather brief conversation, she paid a little closer attention to what had disappeared off her book shelf, and steered me in the direction of Harlequin and Barbara Cartland romances. I was hooked. I quickly read through the inventory of the local library and was soon buying bags of romances at garage sales.In high school, with the encouragement of my father (who I think was a little concerned about the steady diet of romances), I read over eighty of the Franklin Library’s One Hundred Greatest Books ever written—including Tolstoy, Confucius, Plato, and the entire works of Shakespeare. Some of them were tough going for a teenager, but the experience would prove an invaluable foundation for college. After reading War and Peace, I wasn’t easily intimidated.For some reason Monica decided to go into writing and not fashion.After graduation, I loaded up the VW (Jetta not Bus) and trekked down I-5 to attend the University of Southern California, majoring in Political Science and minoring in English (see why all that reading helped!). I joined the Kappa Kappa Gamma sorority, and when I wasn’t studying or at football games, did my best to support the local bartending industry. Ah, the good old days.With that kind of fun, four years of college wasn’t quite enough. So leaving Tommy Trojan behind, I traveled back up north to Palo Alto for three more years of study at Stanford Law School. Once I survived the stress of the first semester, law school proved to be one of the best times of my life—garnering me a JD, life-long friends, a husband, and an unexpectedly intimate knowledge of baseball. (See “The Baseball Odyssey” below).Law School was also where I fell in love with Scotland. In my third year, I took a Comparative Legal History class, and wrote a paper on the Scottish Clan System and Feudalism. So I immediately dropped out of law school and went on to write Scottish Historical Romances…well no, not quite. You see, I always knew I wanted to be a lawyer. My father was a lawyer, I was a “poet” (i.e., not into math), and I love to argue. It seemed natural.So I finished law school, got married, passed the CA bar, moved to Minnesota (with a few stops along the way), waived into the MN bar, worked as a litigator for a few satisfying years, moved back to CA, had a couple of kids, realized that a legal career and being a single parent for most of the year (due to husband’s career) would be extremely difficult, and THEN decided to sit down and write.And how did I end up writing romance? It’s not as divergent as it seems. What I loved about being a lawyer are the same things I love about being a writer—research and writing. The only thing missing is the arguing, but that’s what a husband and kids are for, right
Learn more about Monica by visiting her WEBSITE and her GOODREADS page. You can also follow her on TWITTER and FACEBOOK