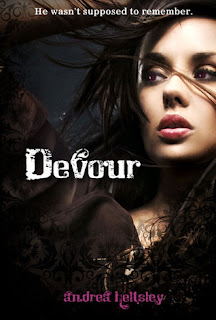 I was given a free ebook copy of Devour by Andrea Heltsley in exchange for an honest review so here it is.

Heres the description:
He wasn’t supposed to remember.
Callie is a royal vampire. She hunts by taking the blood from her victims and erases their memories afterwards. She goes undetected until a victim named Chase approaches her with all his memories intact. He is intrigued and attracted. She is terrified. What happens when a human mixes with the immortal world? Chaos.
Callie’s 18th birthday has passed and she is coming out at the annual blood ball. Will she find a mate or will she suffer the repercussions of her indiscretion? She is brought to the Vampire council and they must decide what to do with Chase. Do they kill him, or turn him to protect their secret?

My Review: I give this book 3.5 out of 5 stars. It was okay. I didn’t love it but I didn’t hate it either.
While I did enjoy the overall story line the internal dialogue of the main character drove me insane. One moment the character behaved very “royal” like since well, she was a part of the vampire royal family, but then the next her internal dialogue goes off on a tangent behaving like an immature teenager. The difference between the two behaviors kind of threw me for a loop.
Aside from that it was an intriguing story. It was well developed and flowed smoothly. There were parts of the story that I found improbable but overall I would say it’s a good book worth reading on a rainy day. The ending was great and was worth getting to!