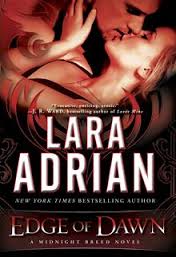 Edge of Dawn by Lara Adrian

Release Date: Feb 26, 2013
Publisher: Delacorte Press
Pages: 289
Description: In this pulse-pounding and thrillingly sensual novel, Lara Adrian returns to the mesmerizing world of the Midnight Breed, following new characters into a dark future where an uneasy peace can unravel into war—and a great betrayal can mask an all-consuming love.

Twenty years after the terror of First Dawn—when mankind learned that vampires lived secretly among them—the threat of violence reigns as the two species struggle to coexist. The only group preserving the fragile harmony is the Order, an elite cadre of Breed warriors dedicated to protecting humans and vampires alike. And in this precarious world of torn loyalties and shattered trust, Mira, a fiery squad captain, finds that every fight bears an intensely personal cost.

Raised among the Order, Mira has always believed in the warrior’s code of swift—and even lethal—justice. But the one thing she desires more than the Order’s hard-won acceptance is Kellan Archer, a sexy but troubled Breed fighter. In love with him since childhood, Mira once broke through his tough exterior during an unexpected night of rapture, but the next day he mysteriously disappeared, never to return.

Kellan didn’t think he would ever see Mira again—or have to confront the truth of why he left. After abandoning the Order years ago, he now leads a band of human rebels intent on carrying out their own vigilante rule of law. Yet a high-profile kidnapping assignment brings him face-to-face with the past he sought to avoid, and the striking woman he has tried desperately to forget. And as tensions mount and the risk of bloodshed grows, Kellan and Mira must take sides—between the competing missions that dominate their lives, and the electrifying passion that claims their hearts.

When I got word that Lara Adrian was releasing Edge of Dawn, the 11th installment in her midnight breed series I knew it was going right on my Must Read list. I was provided an ebook copy by the publisher, something I am of course grateful for and once I downloaded this little gem onto my Kindle I devoured it! Lara Adrian did not disappoint. The story of Mira and Kellen was both riveting and heartbreakingly sweet. I instantly fell in love with Mira and Kellen’s story having developed an attachment to the characters in previous books. The story line was unique and had me on the edge of my seat. There were small moments of predictability in the beginning but once Kellen came out of the wood work it was all eager anticipation for me.
I have always enjoyed Lara’s books having also read her self-published works I am confident when I say that she is the real deal. One of the best PNR writers out there. I loved seeing the strong and confident woman that Mira turned into. I wish I could have seen more of what her and Kellen’s relationship was like prior to his first “death” but all in all I was happy with the story and would highly recommend this book to all lovers of anything paranormal. The twist that Lara throws in at the end was a great and unique way to prolong the Midnight Breed series, something I am very pleased about. I love that her creativity never seems to run out. She always keeps her readers engaged and I expect that there wil be much more for us to see in her furture releases.

I gave Edge of Dawn 4.5 out of 5 stars.
I loved the book, the story, and the characters.
What I didn’t like was I felt there was too much left out between Darker after Midnight and Edge of Dawn. I felt like the leap may have been too big

Click the link below to purchase the book. You won’t be disappointed