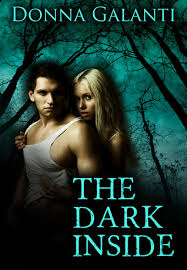 The Dark Inside By: Donna Galanti
Release Date: February 24, 2013
Self Published
70 pages

Description: Heartbreak, danger, lust, and betrayal blaze to life in this collection of stories that reveal the dark places hidden within us. When what you most desire is on the line how far will you go to get it, and what will you give up?
A young man desperate to leave a world that doesn’t accept him–and a father who hates him. A tormented man imprisoned as a science experiment experiences love for the first time. A secret agent gives in to his carnal desires and risks exposing the one secret he wants to keep. A college freshman betrayed by her lover takes matters into her own hands. A young girl is determined not to suffer at the hands of her molester anymore. A sadistic leader who thrives on mind control leads his people into a new life. A teen seeks escape from his abusive foster father and faces a life-or-death situation to survive.
They must either fight the dark inside or embrace it. Which will they choose?
This short story collection features characters and settings from the paranormal suspense novel, A Human Element (Echelon Press 2012), and its sequel, A Hidden Element (forthcoming 2013).

My Review: So this one was a bit tough for me. It was well written and the stories were intriguing but I was left so confused. The book is a series of novellas and while I realize that they feature characters and settings from A Human Element I feel at a loss as to what is really going on. I have not read A Human Element so I don’t know if reading that first would have helped or not but I would hope so. I really did enjoy the story of the imprisoned man (X-10)who was a science experiment but I needed more. I was left hanging. He just got his first taste of physical contact with a woman and we see how he responds to the experience but then she’s gone and he’s alone and thats it. I needed more. An attempted escape or something, I don’t know.
In the first story with the boy who loves a girl at school but she ignores him and his home life sucks and then his mom dies and his Dad finally sends out some random olive branch because his son caught him cheating…It was so confusing and unrealistic for me. I mean his Dad finds him in the well where his Mom’s dead body is and you don’t get any of that. The story doesn’t show weather he see’s his wife or if the son tells his Dad that she is dead and I kind of needed that instead of a ‘son take my hand, we can work this out even though you just saw me banging your aunt’ (not an actually excerpt from the book) It just didn’t do it for me.
Again, the book is extremely well written. If it was longer and gave me more background information as well as more detail in their experiences I’m sure I’d love it but I needed well, more. It was just o-kay for me. I may need to go back and read A Human Element, this just didn’t leave me satisfied and that irritates me. I did like the stories! I’m hoping A Human Element will clear up the confusion though so my recommendation would be to read the first book before reading the novellas.
Rating: I give The Dark Inside 3 out of 5 stars.
It was o-kay. I didn’t love it, nor did I hate it. I finished it which means I liked it a little it just left me a little disappointed and confused.