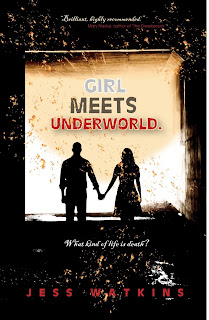 Description: Having lost her mother and brother, Stella stands on the roof of her building, about to jump. She is stopped by a handsome young man, who jumps first. Somehow, he survives and Stella soon discovers that Conner holds a dark secret and more than a passing connection to her own unhappiness.
But Conner isn’t the only man to take an interest in Stella. Will is dangerous. He has mood swings, a crazy older brother and the ability to heal abnormally quickly. Stella knows what Conner is, but what exactly is Will – and why does he appear to know more about Conner than she does?

My Review: I was surprised with how much I really enjoyed this book! The overall story depicts the life of a young college student who recently lost her mother and brother to what the police have deemed to be an animal attack. The main character Stella gets thrown into the world of all things paranormal when she meets a boy Conner who happens to be a vampire, and another boy Will who happens to be a werewolf. She ends up being torn between the two and has to decide who she wants to be with. Throw in an overbearing father who also happens to be paranormal and a series of unfortunate events and you get Stella’s crazy life. She has a lot of ups and downs and quit a few near death experiences. This book was hard to put down! There were parts that were a bit off for me and the language was different since it is more European English and not American English which you notice in the ‘s’ as opposed to ‘z’ in words like recognize and in references to school when Stella says things likes ‘I need to go to University today’ or ‘I attend University’ instead of saying college but it didn’t bother me or take away from my ability to enjoy the book. Overall I liked it. I could have used some more story development and the chapter endings were sometimes strange but I’m looking forward to seeing what Jess Watkins puts out next. The ending definitely sets us up for a second book.

My Ratings: I give this book 4 out of 5 stars. I really really liked it and while I could have used more story development the story in general had good bones that captivated me as a reader.

This book is only $2.99 right now for your Kindle. I’d highly recommend giving it a try! Click the link below to get your copy.