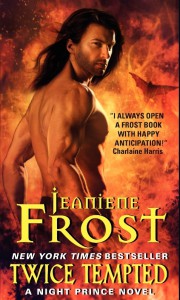 Dating the Prince of Darkness has its challenges . . .

Leila’s psychic abilities have been failing her, and now she isn’t sure what the future holds. If that weren’t enough, her lover Vlad has been acting distant. Though Leila is a mere mortal, she’s also a modern woman who refuses to accept the cold shoulder treatment forever–especially from the darkly handsome vampire who still won’t admit that he loves her . . .

Like choosing between eternal love and a loveless eternity . . .

Soon circumstances send Leila back to the carnival circuit, where tragedy strikes. And when she finds herself in the crosshairs of a killer who may be closer than she realizes, Leila must decide who to trust– the fiery vampire who arouses her passions like no other or the tortured knight who longs to be more than a friend? With danger stalking her every step of the way, all it takes is one wrong move to damn her for eternity . . .

My Review
Another amazing book from Jeaniene Frost! I had high expectations for this one and she exceeded those expectations. Leila goes through a pretty massive emotional roller coaster here and I cried and raged right along with her. In Twice Tempted we got a better glimpse at Maximus who’s a character I really enjoy and am looking forward to seeing more of in future works. There were parts as a reader that bummed me out but more so because I wanted everyone happy and that can’t always happen but this is by far one of my favorite books I have read this year thus far. Its no secret that Frost is one of my all time favorite authors but I am still always shocked to see just how amazing her books turn out to be. If you haven’t read her Night Prince books before go buy them NOW! The first in the series
Once Burned is only $1.99 for your kindle on amazon right now and
Twice Tempted  is $6.64 for your kindle. Both are terrific reads I HIGHLY recommend.
Twice Tempted gets a 5 out of 5 from me. Click the link to buy your copy Twice Tempted

I know 5 star ratings are extremely rare from me so I want to explain why it gets a 5! Twice Tempted gets a 5 star rating from me because I would re-read it. It’s that simple. Its been like a week since I read it and I would re-read it now. It was just that good. Its like that movie that never gets old but better because well, its a book. It deserves a 5 so I give it a 5. I’m sure once you pick up your copy, you’ll agree. The only complaint I have is that the cover isn’t as sexy as the cover for Once Burned. Aside from that I got nothin.