Description: Inventor Henrietta Mason is retiring from airships and adventuring to return home to Philadelphia. Determined to erase all trails leading to her late father’s duplicity, she dismantles his lab and removes all records of the Badlands gold. While in the city, she can’t resist the lure of a charity gala but winds up regretting the whole experience. Well, everything except a heart-racing dance with a certain U.S. Marshal. 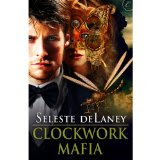 His career and vengeance on the line, Carson Alexander must prove a connection between Senator Mason and the mafia. He lucked out happening across Mason’s strikingly beautiful daughter, only to have her slip through his fingers. On a desperate hunt to track her down, he never expects his search to take him into the brutal Badlands.
With a mechanically enhanced enforcer after them, only Carson knows the extent of the danger they face. He’ll have to win over Henrietta’s trust, and her heart, before it’s too late.

My Review: This was one of those books that I requested as an ARC simply because I loved the cover. Isn’t it just beautiful?! So the cover gets a high rating alone but the story within was an amazingly captivating read. The story centers around Henrietta Mason (Henri) a woman discovering where her place in society lies. She has recently lost her father and finds that his many previous crimes in life are coming back to haunt her. Along the way she meets Carson Alexander, a Marshal bent of avenging the death of his late fiance and bringing down the mafia that Henrietta’s late father had been previously assisting. Together the two carve out a place for each other and we see their relationship blossom though Henri does her best in the beginning to push Carson away. I really got sucked into this book and Henri’s emotional turmoil regarding were in life she fit in. This was a must read for me and the secondary characters catch my attention just as much as the main characters do. I was excited to find out that a novella existing about Ever who is just one of those characters you can’t help but love and hate at the same time. All in all this was a terrific book that I would highly recommend.