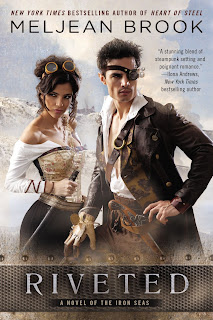 Description: A century after a devastating volcanic eruption forced Iceland’s inhabitants to abandon its shores, the island has become enshrouded in legend. But the truth behind the legends is mechanical, not magical–and the mystery of the island a matter of life and death for a community of women who once spilled noble blood to secure their freedom.

Five years ago, Annika unwittingly endangered that secret, but her sister Källa took the blame and was exiled. Now Annika serves on an airship, searching for her sister and longing to return home. But that home is threatened when scientific expedition leader David Kentewess comes aboard, looking to expose Annika’s secrets. Then disaster strikes, leaving David and Annika stranded on a glacier and pursued by a madman, with their very survival depending on keeping the heat rising between them–and generating lots of steam…

My Review: One of my all-time favorite books from Meljean Brook. I instantly fell in love with Annika. She is such a dynamic character I cannot imagine anyone not loving her. She has an inner strength that has no bounds and I loved watching her grow. She is fiercely protective of those she cares for and has to battle her need to protect her family with her desires for David. Together Annika and David face many challenges that left me on the edge of my seat. I cannot rave enough about this book. If I hadn’t already been such a  big fan of Meljean Brook’s Iron Seas series, this book alone would have sold me and the cover *sigh* its beautiful. It captures David and Annika perfectly! I have not a single complaint.
Riveted by: Meljean Brook
Release Date: September 4, 2012
Berkley Trade Publishing
Pages: 416