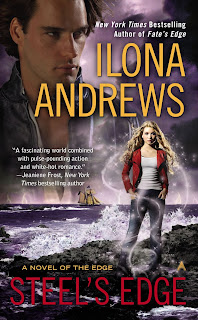 Book Blurb: The Edge lies between worlds, on the border between the Broken, where people shop at Wal-Mart and magic is a fairy tale—and the Weird, where blueblood aristocrats rule, changelings roam, and the strength of your magic can change your destiny…
Charlotte de Ney is as noble as they come, a blueblood straight out of the Weird. But even though she possesses rare magical healing abilities, her life has brought her nothing but pain. After her marriage crumbles, she flees to the Edge to build a new home for herself. Until Richard Mar is brought to her for treatment, and Charlotte’s life is turned upside down once again.Richard is a swordsman without peer, future head of his large and rambunctious Edger clan—and he’s on a clandestine quest to wipe out slavers trafficking humans in the Weird. So when his presence leads his very dangerous enemies to Charlotte, she vows to help Richard destroy them. The slavers’ operation, however, goes deeper than Richard knows, and even working together, Charlotte and Richard may not survive…

MY REVIEW:
First and foremost this series is AMAZING and I wish it was not coming to an end! Charlotte is the type of character that pulls on your heart strings. She instantly sucked me in and made me want to keep on reading. The series as a whole is fantastic and the world building involved is so imaginative and unique. There really is nothing else out there like this. Steel’s Edge had me biting my nails almost the entire time. The epic adventure that Charlotte and Richard go on is riveting to say he least. Richard is fantastic and such a bad ass. He is completely swoon worthy and Charlotte surprises you with her core of steel and determination, unwilling to ever give up. I have been a big Ilona Andrews fan even since I picked up a copy of Magic Bleeds in a Quickie Mart out in the middle of no where because I was bored. Ever since I have followed her books like an addict needing their next fix. The Climax in this book surpassed my expectations and the love story was nothing short of amazing. I still don’t really understand why the series is coming to an end but I do hope that the author revisits it one day down the road. If you have read an enjoyed the series as well than I am sure you will agree that both Jack and George need their own book. All in all this book is mind-blowing. It does not disappoint!

Ilona Andrews is the pseudonym for a husband-and-wife writing team.

Ilona is a native-born Russian and Gordon is a former communications sergeant in the U.S. Army. Contrary to popular belief, Gordon was never an intelligence officer with a license to kill, and Ilona was never the mysterious Russian spy who seduced him. They met in college, in English Composition 101, where Ilona got a better grade. (Gordon is still sore about that.)
Gordon and Ilona currently reside in Texas with their two children, and many dogs and cats. They have co-authored two series, the bestselling urban fantasy of Kate Daniels and romantic urban fantasy of The Edge.
WEBSITE   FACEBOOK   TWITTER  AMAZON  GOODREADS