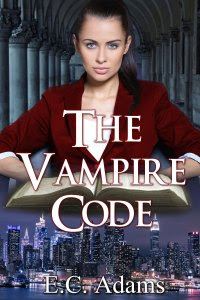 Title: The Vampire Code
Author: E.C. Adams
Publication Date: June 1, 2013
Book Description: ‘The Vampire Code’ is an Urban Fantasy Romance novel about a young lawyer from Manhattan who becomes the target of human hate-groups and of the much more dangerous Vampire Resistance, when she agrees to defend a vampire wrongly accused of murdering a human. In the mayhem that is now Aurora’s life the only constant is Sebastian, the stoic vampire assigned to protect her. Nothing ever seems to affect him. Violence and politics are his life. Yet when an ancient curse starts killing Aurora slowly, he is willing to go to unimaginable lengths to save her. Could she have changed him the way he changed her? And how far are they both willing to go together so they can have the happy ending they both deserve?

Review: First off, Cover..Love it! Fits the book to a T!
In the beginning I was sucked right into the book. It was filled with action and had me sitting on the edge of my seat for the majority of the read. The Vampire Code was a difficult book to put down which always equals a great read in my book. I liked Aurora’s characters and I really liked Sebastian but there were a few things I didn’t love. I felt like Aurora fell a little too hard and a little too quick. One minute she’s not interested, the next she is falling in love. I needed a little more internal dialogue to make the pieces fit together the way they should and make her feelings believable, there one other teeny tiny thing that bugged me but its a pretty big spoiler so I’ll have to leave it out for now. Aside from that though, I have no complaints. The events that took place at the end were a nice twist and the ‘incident’ where she puts two and two together between what she sees and Hespera’s vision left it open for a really exciting second installment. All in all a pretty great read. I think most lovers of UF and PNR would enjoy it so hop on over HERE to get a peak at the first 2 chapters. I think you’ll enjoy them!

E.C. Adams is a mother, a wife and a lawyer – in this order. She currently lives in Malta (Europe) where she can enjoy more than 300 days of sunshine a year. ‘The Vampire Code’ is her debut novel.
Twitter/ Website /Facebook /Book on GoodReads /Author on GoodReads