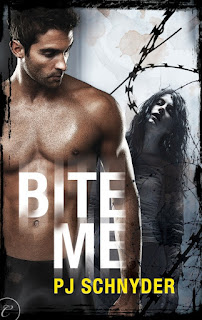 Few people walk the streets of London since the zombie outbreak, but that’s not an issue for Seth. As a werewolf, he can handle himself and save humans reckless enough to take a night time stroll. While on patrol he comes across a group of people under attack. The one woman brave enough to take a stand against the zombies catches his eye—and not just because of her way with a gun. Learning the beautiful woman is homeless and fends for herself only intensifies his urge to protect and care for her.
Maisie can’t help but admit that she’s attracted to her werewolf rescuer. She’s drawn to Seth’s strength and ferocity, and finds herself opening up to him in ways she never imagined, even though she’s determined to not rely on Seth or anyone else. She doesn’t want another person to get hurt—or die—for her sake. She has enough scars, physical and emotional, from the last time…
But when Seth realizes something is drawing the zombies to Maisie, there may be nothing he can do to save her…

My Review:
Bite Me caught my attention from the very beginning and held it! The world-building involved in this story is seriously epic! When you see Maisie protecting a family from a horde of zombies despite her physical disabilities you instantly fall in love with her character! Maisie is tough as nails and brave beyond belief, she’s faced zombies before and willing does so again to protect others on more than one occasion and while she’s protecting a family from being devoured she meets Seth, a werewolf with anger issues not used to smiling anymore but for her, he smiles. Watching Seth push her buttons to get his way was lots of fun and hearing his inner indecisions on how to pursue her brought a smile to my face on more than one occasion. Seth is so strong, so alpha, but watching how his feelings for Maisie turn him inside out makes you like his character just that much more. Bite Me made me an instant PJ Schnyder fan and I cannot wait to see what she has in store for us in her next London Undead installment. Bite Me was a terrific first peak into the series and believe me when I say, I know that you will love this book just as much as I did!

Born and raised in the North East, PJ Schnyder spent her childhood pretending to study for the SATs by reading every fantasy and sci-fi novel she could borrow from the local and school libraries. She scored fairly high in the verbal portion.

She was introduced to the wonderful world of romance a decade later by her best friend at an anime convention in Seattle.
She now lives somewhere temperate watching the seasons go by with her two dogs and super stealthy ninja kitty, writing her stories and gaming.