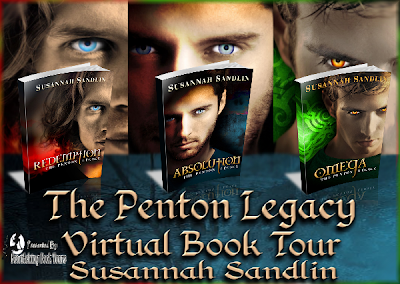 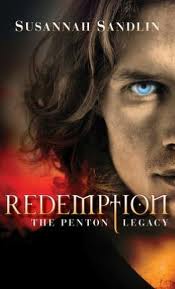 REDEMPTION
Book One Penton Legacy series
By Susannah Sandlin
Amazon      Barnes and Noble     Book Depository
Following a worldwide pandemic whose vaccine left human blood deadly to vampires, the vampire community is on the verge of starvation and panic. Some have fanned into rural areas, where the vaccine was less prevalent, and are taking unsuspecting humans as blood slaves. Others are simply starving, which for a vampire is worse than death—a raging hunger in a creature too weak to feed.
Immune to these struggles—at first—is Penton, a tiny community in rural Chambers County, Alabama, an abandoned cotton mill town that has been repopulated by charismatic vampire Aidan Murphy, his scathe of 50 vampires, and their willingly bonded humans. Aidan has recruited his people carefully, believing in a peaceful community where the humans are respected and the vampires retain a bit of their humanity.
But an unresolved family feud and the paranoia of the Vampire Tribunal descend on Penton in the form of Aidan’s brother, Owen Murphy. Owen has been issued a death warrant that can only be commuted if he destroys Penton—and Aidan, against whom he’s held a grudge since both were turned vampire in 17th-century Ireland.  Owen begins a systematic attack on the town, first killing its doctor, then attacking one of Aidan’s own human familiars
To protect his people, Aidan is forced to go against his principles and kidnap an unvaccinated human doctor—and finds himself falling in love for the first time since the death of his wife in Ireland centuries ago.
Dr. Krystal Harris, forced into a world she never knew existed, must face up to her own abusive past to learn if the feelings she’s developing for her kidnapper are real—or just a warped, supernatural kind of Stockholm Syndrome in which she’s allowing herself to become a victim yet again.
Susannah Sandlin’s REDEMPTION is the first in the Penton Legacy series. Book two, ABSOLUTION, will be out September 18, and book three, OMEGA, on December 18.
My Review
I cannot believe I hadn’t come across this book before. I absolutely loved reading Redemption. Susanah Sandlin gives you a Vampire world with a twist and throws in some pretty exciting action. I loved watching Krys and Aidan fall for one another especially since Aidan kidnapped her to begin with. It was funny watching Krys fight her attraction for her kidnapper even though he is drop dead gorgeous. Safe to say I would have fallen for him as well.
There is just something about the way that Sandlin writes that keeps you turning the page. I was glued to this book and was so anxious to see if Aidan would have the heart to do what needed to be done when it came to his brother. Sandlin also made me fall for all of the secondary characters as well. Safe to say I’m eager to see who captures Will’s heart in the future 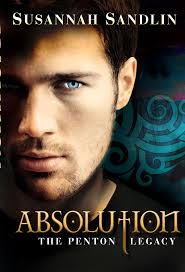 ABSOLUTION
The Penton Legacy, Book 2
By Susannah Sandlin
Amazon    Barnes & Noble   Book Depository
Book Description:
With the vampire world on the brink of civil war over the scarcity of untainted human blood, battle lines are being drawn between the once peaceful vampire and human enclave of Penton, Alabama, and the powerful Vampire Tribunal.
A Scottish gallowglass warrior turned vampire in the early 17th century, Mirren Kincaid once served the Tribunal as its most creative and ruthless executioner—a time when he was known as the Slayer. But when assigned a killing he found questionable, Mirren abandoned the Tribunal’s political machinations and disappeared—only to resurface two centuries later as the protector and second-in-command of Penton. Now the Tribunal wants him back on their side—or dead.
To break their rogue agent, they capture Glory Cummings, the descendant of a shaman, and send her to restore Mirren’s bloodthirsty nature. But instead of a monster, Glory sees a man burdened by the weight of his past. Could her magic touch—meant by the tribunal to bring out a violent killer—actually help Mirren break his bonds and discover the love he doesn’t believe he deserves?
It’s a town under siege, a powerful warrior in a battle with his past, and one woman who can make the earth move—literally—as the Penton Legacy continues.

My Review
Oh Mirren, Mirren, Mirren, you poor sad soul. Mirren is that big, tough, strong guy with such a broken soul inside and he never lets anyone get close. It sure as heck takes a woman like Glory who will talk her way into what she wants, to get through his tough outer shell. I love that Glory fights for him. That she refuses to let Mirren hide from her and from their love and *sigh* I just love their story and their characters and everything about Absolution! I really liked book 1 in this series and didn’t think it could get any better but boy was I wrong. Absolution was EPIC! I’m eager to see how Omega works out for the community of Penton and am excited to dive into book 3 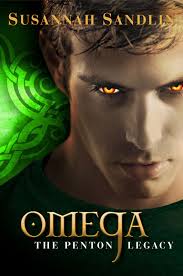 Omega
Penton Vampire Legacy, Book 3
Susannah Sandlin
Amazon        Barnes & Noble        Book Depository
Book Description:
The bloody war between the Vampire Tribunal and the defiant scathe of Penton, Alabama, rages on, forcing its residents and their bonded humans to retreat into the underground fortress of last resort: Omega. There, Will Ludlam is charged with the care of Penton’s humans, though he longs to fight alongside his vampire brethren. He knows the risks: as the renegade son of the Tribunal’s vicious leader, Will’s capture could doom the resistance.
Yet he is determined to prove his worth to his adopted scathe, to his vengeful father and to former US Army officer Randa Thomas, his beautiful, reluctant partner. Randa has little faith that a former member of the vampire elite has what it takes to fight a war. But as their enemies descend upon Omega, Will’s polished charm and Randa’s guarded heart finally give way to the warrior within.
Fans of Susannah Sandlin’s Penton Legacy are sure to devour this long-awaited third installment of the steamy paranormal series.
My Review
Oh my goodness, Omega is seriously EPIC! Hands down, one of the best books I have read in 2013. I thought it couldn’t get much better after Absolution but boy was I wrong! The twists and turns in Omega kept me on the edge of my seat. I’ve been waiting since book one for Will’s story and Sandlin did not disappoint! I had an idea that Will and Randa might end up together but watching their story unfold was riveting. I loved both characters and easily related to them. Will is amazingly strong and brave and Randa is tough as nails on the outside with a soft sweet center. These two clashed from the very beginning, I think because deep down, they are so much alike. I wish book 4 was out already. I want to read Cage’s story soooo bad. Sandlin definitely set us up once again for another highly anticipated release and I cannot wait for its arrival!!! Susannah Sandlin is the author of paranormal romance set in the Deep South, where there are always things that go bump in the night. A journalist by day, Susannah grew up in Alabama reading the gothic novels of Susan Howatch and the horror fantasy of Stephen King. (Um…it is fantasy, right?) The combination of Howatch and King probably explains a lot. Currently a resident of Auburn, Alabama, Susannah has also lived in Illinois, Texas, California, and Louisiana.
Website: http://www.susannahsandlin.com
Twitter: http://www.twitter.com/susannahsandlin
Facebook: http://www.facebook.com/susannahsandlin
Goodreads: http://www.goodreads.com/author/show/5828129.Susannah_Sandlin
Indie Bound: http://www.indiebound.org/book/9781612183541