Re-Release: July 30, 2013
Publisher: Dell
Blurb: Private Investigator Nikki James grew up on the tough streets of Lyndhurst and believes there’s nothing left to surprise her. All that changes the night she follows teenager Monica Trevgard into the shadows-and becomes a pawn caught in a war between two very different men. One fills her mind with his madness, the other pushes his way into her life-and her heart. Nikki knows how dangerous love can be, but if she wants to survive, she must place her trust in a man who could easily destroy her.
Michael Kelly has come to Lyndhurst determined to end the war between himself and another brother of the night. For 300 years he has existed in life’s shadows, gradually learning to control the life from death cravings of a vampire. Nikki not only breaches his formidable barriers with her psychic abilities, but makes Michael believe he may finally have found a woman strong enough to walk by his side and ease the loneliness in his heart. But will his love be enough to protect her from a madman hell-bent on revenge? Or will it drive her into his enemy’s deadly trap?
Only together can they overcome the evil threatening to destroy them both. But the secrets they keep from each other might prove to be the greatest threat of all.
My Review

So I don’t feel that Dancing with the Devil falls into the typical UF category. There is a bit more of a thriller aspect to it and it has a lot more darker moments than I would expect from UF. The story was intriguing at times but I found it really difficult to like the main character. I felt like Nikki made a lot of really stupid decisions for no apparent reason. Like, I’m going to go in the creepy house when I know danger is waiting just because I think I need to save someone who I know is already beyond saving. Or I’m going to stop Michael from making sure she doesn’t rise from the dead as a Vampire because well, she should get to keep her head…even though she wants to kill me, and is dangerous, and will probably kill more people.

I don’t know, this one just didn’t meet my expectations, especially with what I have read from Keri in previous books. I will say that I liked Michael. His darker more mysterious side made him an interesting character to follow and his internal struggles held my attention through out the book but I still didn’t love it and Michael needed a little more help in some situations that I think the alpha male character in a book should need. I think Nikki was intended to be a heroine but she fell a little short and wound up being a victim more than I would have liked as well.

Dancing with the Devil was also very long. At 368 pages, it tended to drag on a bit too much for me. I still did like it. I finished it, and I do want to see what happens next so it is safe to say I plan on reading book 2 in the series. I just wish there was a little more to it, and I don’t mean in page length. Dancing with the Devil is a re-edited and re-released book, I’m not sure when Arthur wrote it but I think it still feels like earlier work. Not quit up to parr. The story line itself does have merit though so don’t let me completely deter you. This one just wasn’t really my cup of tea…or coffee.

Dancing With the Devil: Nikki and Michael Book 1 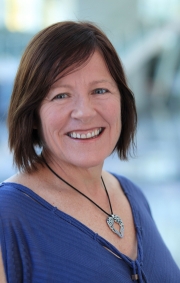 The Unofficial BioI’m a born and bred Melbourne (Australia) gal, and grew up sharing my life with dragons, elves, vampires, werewolves, shapeshifters and the occasional talking horse. Which worried my family to no end. Of course, now that I’m actually make a living sharing my life with the above mentioned creatures, they no longer contemplate calling the men with the little white coat. When not at my keyboard, I can be found at the gym, sitting front of the TV, or taking my two dogs for a walk.
The Official BioKeri Arthur, author of the New York Times bestselling Riley Jenson Guardian series, has now written more than twenty-eight novels. She’s received several nominations in the Best Contemporary Paranormal category of the Romantic Times Reviewers Choice Awards and has won RT’s Career Achievement Award for urban fantasy. She lives with her daughter in Melbourne, Australia.