Alice’s Alpha
By Ann Gimpel
Publisher: Liquid Silver Books
Release Date: 7/1/13
Genre: Paranormal Romance/ Spicy hot shifter ménage story
Book Description:
Snared by the shifter mate bond, Alice’s carefully tended wasteland of a heart cracks wide open.
It’s 1936. Thirty-year-old Alice has almost given up finding a man. Between civil engineering and mountain climbing, her interests are so masculine she scares men away. A poor route choice lands her next to horror movie star Lon Chaney’s cabin deep in the Sierra Nevada Mountains. She’s wary when Jed, a strikingly handsome man, offers her shelter.
By the time she discovers he’s clan leader for a pack of wolf shifters, she’s in way too deep to back out. Her carefully tended wasteland of a heart cracks wide open and all her preconceived notions shatter. Snared by the mate bond, Alice discovers passion hot enough to change her forever. She’s just getting used to Jed when his clan brothers show up, and she discovers she’s mated to all three. 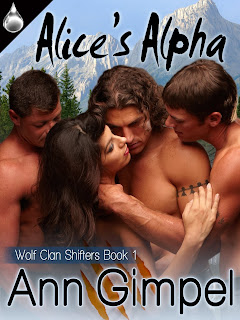 Alice’s Alpha starts out as a steamy read from the very beginning! Alice and Jed seem to have instant chemistry that begins to fall apart at the seams when 2 more hunky shifters enter the picture. Lots of conflict, lots of sex, and lots of blushing on my part. Alice’s alpha is ‘smut’ at its finest. Random tid bits that striked me as a bit odd were the fact that Alice was a 30 year old VIRGIN and even though this book is super steamy..it was a touch tame for a foursome. Also, I would have liked some more info on Terin and Bron. The bulk of the story was about Jed and Alice and I felt like Terin and Bron were kind of throw away characters who were only there to make the sex more interesting. That being said, I really enjoyed it. It was a quick read and well, who doesn’t like a quick steamy read?!

About the Author
Ann Gimpel is a clinical psychologist, with a Jungian bent.  Avocations include mountaineering, skiing, wilderness photography and, of course, writing.  A lifelong aficionado of the unusual, she began writing speculative fiction a few years ago. Since then her short fiction has appeared in a number of webzines and anthologies. Several paranormal romance novellas are available in e-format. Three novels, Psyche’s Prophecy, Psyche’s Search, and Psyche’s Promise are small press publications available in e-format and paperback. Look for two more urban fantasy novels coming this summer and fall: Fortune’s Scion and Earth’s Requiem. A husband, grown children, grandchildren and three wolf hybrids round out her family.
www.anngimpel.com
http://anngimpel.blogspot.com
http://www.amazon.com/author/anngimpel
http://www.facebook.com/anngimpel.author
@AnnGimpel (for Twitter)