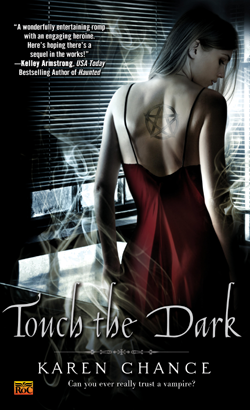 Cassandra Palmer can see the future and communicate with spirits-talents that make her attractive to the dead and the undead.  The ghosts of the dead aren’t usually dangerous; they just like to talk…a lot. The undead are another matter.Like any sensible girl, Cassie tries to avoid vampires.  But when the bloodsucking Mafioso she escaped three years ago finds Cassie again with vengeance on his mind, she’s forced to turn to the vampire Senate for protection. The undead senators won’t help her for nothing, and Cassie finds herself working with one of their most powerful members, a dangerously seductive master vampire-and the price he demands may be more than Cassie is willing to pay…

So, many of you know that I recently stumbled upon the Cassie Palmer series by reading a copy of Tempt the Stars which happens to be book SIX in the series. I know, I totally read out of order so I’m starting at book one and it was amazing! I knew a little of what I was getting into since I have already read book 6 and I was anticipating because a touch disappointed because of that fact but I wasn’t, at all. The first book was wonderful. Full of twists and turns.
I loved the development of all of the characters and loved seeing the very beginning of what laid in store for Cassie and Mircea though I will say, my heart broke a bit over Tomas. I won’t give to many details because I don’t want to spoil anything but yea…jerk LOL
All in all, I’m so glad I got sucked into the series. I’ve been devouring the books like crazy and cannot wait to see what the author has in store for Cassie in book 2.

Karen Chance is a New York Times bestselling novelist, writer of the popular Cassandra Palmer and Dorina Basarab urban fantasy series. For more information, the latest news, free stories, contests and more, visit her website at KarenChance.com or stop by her Facebook page at http://on.fb.me/cassandrapalmerseries.